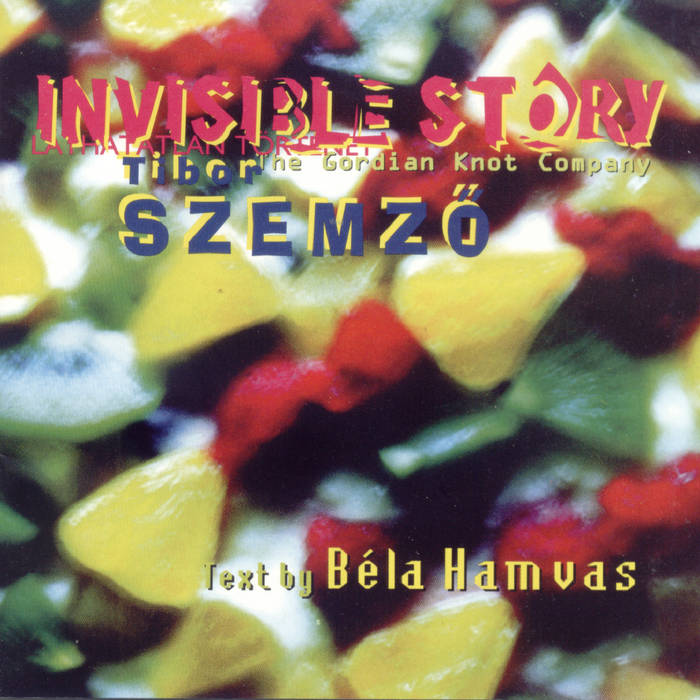 Invisible Story (1943) was the first, and also the only, volume of essays that Béla Hamvas saw published while he was alive. As his widow, Katalin Kemény puts it: it is a real story of "the first and last soul" in the face of the history of raging appearance. An enthrallingly precise work of writing: an essay in terms of form, though – perhaps needless to say – that precision is not inspired by science but poetry. And the essayist, as Hamvas himself aptly says, proceeds in unknown country, "alone, rudderless, on the open sea."

I would hereby like to express how greatly indebted I am to Béla Hamvas, the author of these texts, and his widow, Katalin Kemény, who consented to my using her late husband’s works.

It is said / there is a celestial body in the universe, a unique body of its kind, Sirius Beta, a frigid, extinguished star, a lightless, heatless, motionless body, where the atoms lie scattered about higgledy-piggledy, totally disordered, as if on some colossal rubbish-tip,
consigned to oblivion. This is Sirius Beta, materia par excellence.

Once man becomes a materialist, in other words, once man begins to believe the world was and is made of matter, and he is wedded to this matter, and doggedly clings to it, and for him matter means seriousness, surrounds, lust, religion, then man begins dimly to sense that he too is some such fallen and disgorged, pulverised and smashed-up object, flushed down a sewer, tossed on a junk-heap. A vestige that has forsaken contact with Nature’s spiritual forces, detached from the cosmos, brought to a standstill by a terrible catastrophe. He has lost any spiritual reference-point, and so he regresses and sinks.

It is said there is a celestial body in the universe, a unique body of its kind, Sirius Beta, a frigid, extinguished star, a lightless, heatless, motionless body, where the atoms lie scattered about higgledy-piggledy, totally disordered, as if on some colossal rubbish-tip, consigned to oblivion.

The masses of today are beginning to reimmerse themselves into an advanced state of prehistorical backwardness. They become primitive. Consciousness of person wanes, graven idols and fetishes take the place of the deities, everything savage, monstrous, incendiary and false is blazoned, the place of thinking is taken over by superstition, man is unable tell himself apart from others, and identifies with something that he has nothing to do with.

In society the vertical intrusion of barbarism is merely the visible sign of a catastrophe being played out in the invisible world of the soul; the real changes are occurring inwardly, in the world of the psyche, specifically by the unconscious swamping human consciousness like a swollen ocean.

It’s no longer just a threat, It’s here now, and it has already swamped a large part of humanity.

The signs of mass assembly, primitiveness: mankind as a whole has descended into unconscious obscurity and sunk into the darkness in which the primitive dwell.

People who have reflected on and written about the barbarisation of humanity supposed that the danger is one threatening the soul, culture and exalted men. Yet exalted men can only be swept away by the tide of the unconscious if they are not, in fact, exalted in their existential essence.

Only mass man can become primitive and savage.

A sixth, and totally new, human race is in the making across the face of the world. The manner of the formation, origin and evolution of this new human race is a great, inexplicable mystery.

As long as those belonging to this race stood alone, scattered to all corners of the Earth, they seemed even to themselves abnormal, impossible creatures, not merely incapable of adjusting to those around them and their world but lacking even a single essential point of contact with these.

These people were left to themselves, scattered across Earth, set in corners and ostracised by those around them. They were aliens. For they truly were alien.

In all likelihood, very many members of this new race were lost. Who knows how? Some took their own life, others sank into depravity, took to the bottle or rebelled, fell foul of the law and went to prison. Some became melancholic or unhinged.

Ultimately, in an inexplicable further great mystery, fully comparable to the mystery of the formation of the new race, there slowly arose in representatives of this new race a consciousness that I am no longer alone.

The whereabouts those similar to me are still a secret. But now at least I know that they exist, and when I encounter them I recognise them without a word passing between us.

As long as there is just one of a kind, he is an exception, two are still odd, but three already makes a community. As yet rudimentary. The third great mystery, that of their converging and uniting, still awaits.

In a mass Individual consciousness is annulled. The mass has a quite new character, totally independent of any individual behaviour. Precisely that it is unconscious. Volatile, gullible, prejudiced, retrograde, despotic, obtuse, dismal, hysterical; it has no intelligence, no judgement, is unable to weigh, is readily convinced and even more readily steered and made a fool of.

Caught up in a mass even the most rational person becomes dim-witted in the twinkling of an eye. The brain is disconnected, the operations of reason cease to function, consciousness peters out to be supplanted by an obscure, indistinct, fitful paralysis that is so characteristic of the mass. Sound and sober common sense is obliterated, and unfathomable proclivities arrogate dominion over mankind.

And the individual is assimilated entirely into the mass. Those in the mass coalesce into a single soul. The mass does not judge, does not contemplate, does not love nor try to comprehend, rather fears, rages, marvels and surrenders. But paramount of all it destroys.

Nothing is more characteristic of the unconsciousness of the mass than that at this moment, it believes it is the lord of the world although in the very jaws of death. Yet even here it searches for its enemies. It believes its victory is under threat. It fails to notice is that insofar as anyone speaks out in protest, it’s in the interest of the mass. Yet there is a tacit accord amongst the members of the mass that the dangerous creature may and should be extinguished.

Experience shows in all areas of society, and with total uniformity, the way in which the mass systematically, albeit instinctively, oppresses those in whom it sniffs out a scent of the new. Such creatures may be beaten down, are left to be and must be robbed, stamped upon and cheated. They are allowed no chance to speak.

The fact of belonging to this tacit alliance is the distinguishing mark of the mass.

Totems come into being when man en masse is unclear of the significance of nation, race and language, and the common destiny of peoples, nor able consciously to grasp the great facts and reality in the life of the collectivity.

Fragmented and dispersed, human beings rub alongside each other like so many grains of sand or pebbles, without noteworthy, serious interaction, atomistically.

The greatest of all dangers threatening a populace is not falling into servitude and being forced to slave for a mightier, more numerous and more belligerent people. Servile peoples can still be great, for all their poverty, work and humiliation, they can still live a lofty destiny.

The greatest of dangers threatening a populace is to become primitive.

That is how it becomes mob, a coarse rabble, breaks up, degenerates, and vanishes…

…the tropical rain-forest’s Indians and black hunters, the Eskimos of the tundras, the Aborigines of the Australian desert.

An idea is an internal image with whose assistance a higher Power elevates man to its own level. From matter too there radiates something, though that is not idea but precisely its diametric opposite. The opposites of idea are the radiating images of forces dwelling in matter, Paracelsus being the first to spot them, and designate them by the name evestrum. An idea is an uplifting image, an evestrum deposes and degrades. An idea cleanses and shines brightly, an evestrum is dark and pollutant. He who bends his life to the world of idea, is ennobled, climbs ever higher, becomes more harmonious, more lucid, more profound, and wealthier. Without idea no lofty, great, rounded, splendid life exists. The images of idea are the means by which higher Powers raise people who open up towards them. An evestrum is the radiation of dark, destructive forces dwelling in matter which brings down and incapacitates, stupefies and crushes to bits.

all music composed by Tibor Szemző
2001 © & ℗ all rights reserved